Ever think about how the Entertainment Industry impacts your health? Consider these points. 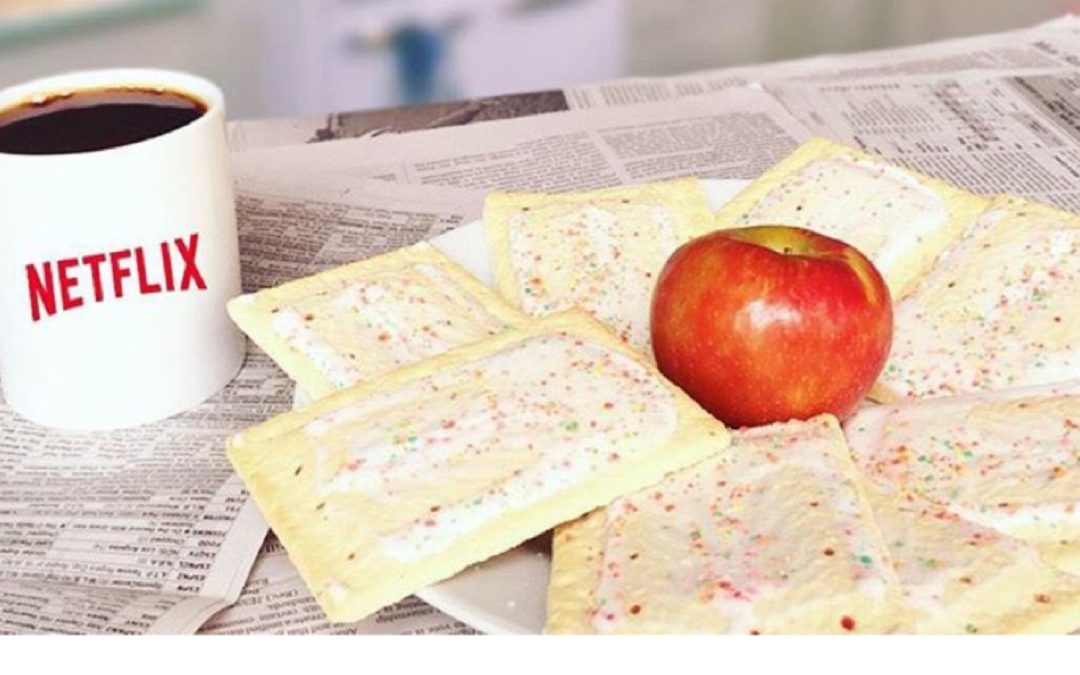 I love to be entertained and emotionally provoked by well-scripted human drama.  I can easily fall victim to infamous Netflix binges, taking my harmless commitment to one episode of Man Men and turning it into a shameful four-hour binder until midnight.  By the time I cut myself off, my personal problems have long-since been replaced by the complexities of Don Draper’s repressed male trauma and sexual dalliances.  And suddenly I really need a whiskey, a cigarette, and some feminist pride.

Most of us have had some version of this experience since television made it’s big debut into modern human lifestyles.  We’ve taken our species’ ancient drive towards drama and campfire stories to a whole new level with digital entertainment and globalize hollywood standards.  And since entertainment serves a purpose vital to the human experience, I’m not opposed even to the hollywood versions — it’s all in the way that we choose to use it.

I believe most of us have at least a superficial understanding of the health impacts of late-night device usage and of becoming a “couch potato,” so this isn’t the focus of this article.  I cover the health impacts of sedentary living and of artificial light here and here if you’re interested in those topics. In this article, I’d like to bring up a few ways which the entertainment industry and celebrity culture can fuck with our personal perceptions of reality and thus impact our mental and physical health.

We all know about this aspect of the media.  Media floods us with images of how we should look and what we should buy in order to get us this standard of beauty.  However, these media messages are much more obvious when they’re on a billboard, a Cover Girl commercial, or a tv clothing ad.  What makes television programs potentially more harmful is that we start to invest in the humanity of the characters and we begin to relate their struggles and passions to our own.  Most of us don’t look critically at each scene and scrutinize the fact that the young heroine in the show just woke up with perfectly straightened hair and flawless skin.  But our unconscious will make note of it after a while.

Psychologically, we relate to the characters’ emotions as if they’re those of our friends and lovers – as if they’re our own.  And we begin to send ourselves messages that having a blow out every single day and completely flawless skin is a normal thing to expect of ourselves. This is where our health can be really impacted by our entertainment choices. We start to work towards unrealistic and otherwise unimportant standards, which often take the place of more important goals — such as healthy hormone/energy levels, clear detox channels, biological strength and resiliency, and simply feeling good in our own bodies.

And while it’s true that some people do naturally have really fine skin and slender figures due to health or genetic advantages …… it’s not common in industrial society to have totally flawless skin and perfect figures.  It’s completely unrealistic to have perfectly shiny locks straight out of a Pantene ProV commercial every day.  Our skin gets freckles and even the healthiest skin will get some wrinkles and blemishes sometimes… this is natural.  Our hair gets frizzy and oily and split ends appear – even on healthy people!  Especially on healthy people because using natural shampoos which don’t leave plastic preservatives in our hair to give it that celebrity glow will leave us with “normal person hair.” 😮

This ties in with my last point, as we are what we eat and our diets will realistically impact our appearance – especially in the long-term.  But in entertainment, they often don’t have any correlation at all.  How much commercial endorsement a show or movie gets will vary, yet I rarely see shows or movies in mainstream culture which regularly emulate healthy eating and living.  So, not only are we sending our unconscious regular messages about how we should look, we’re also sending our unconscious totally whack signals regarding what is normal to eat.

I’ve been enjoying revisiting some of the shows I grew up watching on Netflix (Buffy The Vampire Slayer, Seventh Heaven, Friends, 90210, Dawson’s Creek, Party of 5, etc.)  Every single one of these shows portrays the characters eating Kellogs flakes, OJ, and muffins for breakfast, pizza, soda, and hamburgers for dinner.  In some shows, such as The Vampire Diaries (yes, I like cheesy shows), every character drinks about half a bar on a regular basis, sending us the message that passionate attractive young people can stay attractive and high-functioning while also binge drinking regularly.  It’s completely crazy.

Another example of a series that I went through on Netflix which left me with totally unrealistic perceptions was Gilmore Girls. Both women are beautiful, slender, in great health with high-energy … despite regularly binging on candy, ding-dongs, and leftover Chinese.  Several times while watching I found myself craving crap I haven’t thought about in years – such as twinkies and pop tarts.  Also appalling was watching a mother raise her daughter on crap that’s now implicated in the development of most chronic inflammatory & autoimmune diseases.  The characters were emotionally relatable – yes – despite their energy, mood, and appearance being completely unscathed by the complete trash they subsisted on.  This would never happen in real life…. but our unconscious mind doesn’t know the difference.

Have you noticed that most films and shows follow a specific plot structure?  They get you invested in the characters and their stories, then they create drama and/or opportunities for you to feel disappointed or anxious, which drives you to root for some outcome or finale.  The happily-ever-after outcome.  The good guy lands the girl in the end.  The diseased person goes through surgery and survives in the end.  The unhappy person finally gets divorced or quits their job and creates their dream life.  The End.

As I’m sure you’re aware, life rarely actually works out like this.  Even when we win one big battle, life will give us more challenges or complications to test our patience and resilience.  Even if we marry the man of our dreams, the real work begins after the honeymoon is over and we have to manage each other’s expectations.  So it goes with every aspect to life which hollywood often paints in black and whites.  This especially applies to healing from complex chronic illness, including trauma and addictions.  It’s not always linear and it’s not something you attain and then you’re set for life.

There are set-backs, curveballs, and layers. Science is ever-evolving, offering us new insights and methods for understanding and healing.  The more we learn about our inner-child, family history, and genetic ancestry, the more our healing possibilities expand and what we need will change.  We need to anticipate that our symptoms, challenges, and needs will change.  And growth will always be a necessity.  The amount of time and commitment it takes to get us to a place of thriving maintenance is VERY personal and will never look exactly like someone else’s journey, especially if our illness is complex.  The Hollywood script doesn’t apply to our real-world challenges, but again – our unconscious doesn’t know the difference.  We have to consciously train our own expectations.

Our perceptions and behaviors in life are shaped by the unconscious storehouse of beliefs we have under the surface. These deeper beliefs keep us from making healthier choices even when we consciously know we want to.  It’s important, when healing, that we place awareness and intention on the unconscious beliefs we endorse and feed regularly and this includes the beliefs regarding how we should look in order to be the best versions of ourselves.

It’s also important to remember that mainstream entertainment is not driven by standards of health, but by economic incentives and emotional manipulation.  If you can remember this, you’ll be less inclined to waste time watching trash, and you’ll also be less likely to unconsciously endorse the trash you do watch.